The National Road (also known as the Cumberland Road)

The National Road was one of the most successful turnpikes build during the American Transportation Revolution. Unlike the others, it was not an unprofitable venture; additionally, the  national road was made even more unique by the fact that it was the first to be entirely funded by the federal government.

Return to Turnpikes and Roads

The National Road: A Federal Project 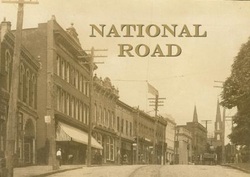 Most turnpikes created prior to the National Road were managed by local town legislatures, counties, or, at most, states. However, the ideal of the federal government itself overlooking such affairs was one that was still unique to the young United States. Thus, when the national government took over the task of creating a National Road, an important precedent was set in US history.

What Sparked the Idea of a National Road?
The concept of a National Road was initially brought up by lawmakers in Congress in 1802 after the passage of a legislation that enabled Ohio to become a state. Included in this legislation was a clause that gave Congress the power to use federal monies to construct public roads that transgressed state boundaries. This new power allowed for Congressmen to envision creating an east-west route that would connect the Atlantic with the Ohio River. This route, it was hoped, would help conjoin the American West and interior with the Northeast, thus enabling greater commerce and trade between the two regions.

The Creation of the National Road 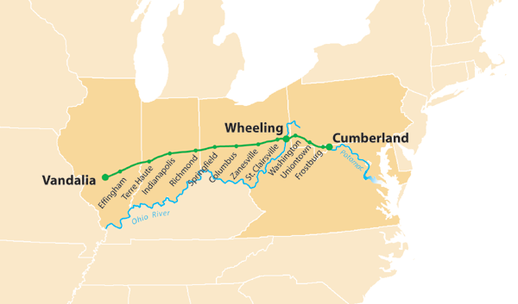 Four years after the National Road was initially proposed, Congress found a suitable corridor for its construction. After managing to appropriate $30,000 from the Treasury, the project began under the leadership of Albert Gallatin, who was President Thomas Jefferson's secretary of the state at the time.

The initial starting point of the road was aimed to Baltimore, Maryland. However, the federally funded portion of the road began at Cumberland, which was another Maryland city located in the western portion of the state. Due to its starting location, the road gained its other name, "The Cumberland Road." After the starting point was established, the road was adumbrated so that it would trace the path of a famous Native American trail that George Washington had once followed on his way from Maryland to Pennsylvania.


These plans, however, could not all be executed once construction of the road began in 1811. The eastern potion of the road, as it turned out, was extremely difficult to build due to the tall mountain ridges that interfered with the construction process. However, regardless of such difficulties, the road continued its way from Cumberland westward, and by 1818, the National Road had reached Wheeling, Virginia. After construction resumed in Ohio in 1825, and after another respite, in Indiana in 1829, the road finally reached its final destination in Vandalia, Illinois in 1839, though construction continued afterward. The road stopped 70 miles from its planned goal of St. Louis, but the approximately 600 mile distance it did manage to cover made it a remarkable success in the eyes of many Americans. The 20 foot wide road composed of a lower 7 inch layer of diameter stone and an upper 3 inch layer of diameter stone mixed with soil and gravel was a miracle in the eyes of any ordinary US citizen. The final result of the many years of work that went into the project were well worth it, as the economic benefits and commercial trade improvements greatly aided the nation's industrialization.
Sources: 5, 6