The Transition From Canal to Railroad 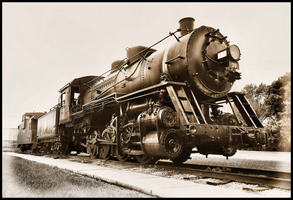 New Technology, New Advantages, New Investors:
Though canals dominated the infrastructure of the United States for most of the early antebellum period, it was superceded in terms of effectiveness by emerging raolroad systems. Railroads were faster and chaper than canals to construct and they did not freeze over in the winter. These advantages made them clear superiors to traditional canal systems; however, due to many states' previous investments in canals, railroad growth was initially hindered. Thus, the role of state governments was interceded by private investors.

Initial Developments in Great Britain:
The first railroad in the world was developed in Great Britain. By amalgamating the steam technology already in use and the ongoing developments in transportation, George Stephenson was able to create the first locomotive. These steam locomotives were not only popular in Europe, but also in America, where much of the equipment and technology was imported. From the Stephenson Works company in England, the United States purchased engines and rail. However, even though this was a costly transaction, the resulting decrease in shipping costs by 60-70% in the United States was well worth it.

Mass Railroad Usage in the United States:
With the introduction of the railroad into the United States, its economy grew immensely as did its transportation infrastructure. The initial creation of the Baltimore & Ohio Railroad and the Chareston and Hamburg Railroad incited greater internal development. After a brief stall during the Panic of 1837, railroad construction resumed with full force. By 1840, the US had double as much track as all of Europe had, and by 1860, the gross sum of railroad track in the US became over 30,000 miles, most of which were concentrated in the North. Interestingly enough, there wasn't a single southern, independent railway system, but rather, only those that connected to the Northeast region of the nation.

Over time, the problems in terms of dangerous travel were ameliorated. Modifications in locomotive designs enabled trains to make sharp turns safely, while new engines that burned coal instead of wood precluded the chance of fire and accident. This risk was further reduced due to better breaks and the iron T-rail, as well as more durable tracks. Finally, to deal with the issue of locally-focused railroad systems, this issue was handled through the standardization of railroad tracks. Previously, cities had kept their tracks unique sizes so other trains could not use them and trade would be limited to the local level; however, once these tracks were standardized, such isolation was no longer possible and economic growth was forcibly instigated.

The only one problem that was not actively taken care of was the unemployment issue for canal owners and tavern/innkeepers. Though they remained disappointed by the railroad industry harming their business, their pleas were ignored. Fights were aroused and violence was common, but ultimately, the economic benefits of the railroad outweighed the complaints of these skeptics. Thus, the railroad system's prevalence throughout the antebellum and even into the late 19th century was guaranteed.

The Three Major Railroads That Emerged in the 19th Century:

Effects of Railroads on American Society 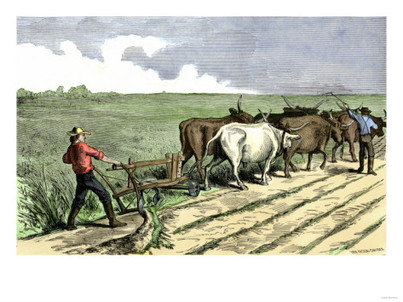 The development of so many railroads in the United States changed its society forever. Foremost, it provided indirect benefits be encouraging settlement and the expansion of farming, thus transforming agriculture. In the past, farmers could cultivate little of their land -- especially those in the western part of the US -- since transportation of the finished product was so burdensome. However, with the new system of railroads, farmers were able to produce and grow more as their goods could be easily moved from region to region. Likewise, as the interior grew from trade, so did the Eastern seaports. These locations, along with intermediate centers like Cincinnati, benefited from an increase in exportable goods.

In the end, the total effect of railroads on American society lied in their ability to link various, normally distinctly separate regions of one nation together. By overcoming rough terrain and increasing the speed of trade while creating an abundance of jobs for incoming migrants, railroads bolstered a booming American economy.
Sources: 1, 2, 4, 10, 11