The Erie Canal, a 363-mile long artificial waterway constructed in 1825, was the last of a series of canals binding New York to the Great Lakes.

The Erie Canal: A Brief History 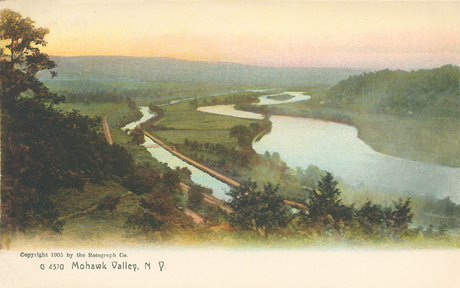 Mohawk Valley: An Obstacle in Gov. Clinton's Way
Throughout the century preceding the 1800s, New York citizens had dreamed of building a canal across New York to the Great Lakes. This dream, however, was never executed fully by any of their past leaders. However, this all changed when DeWitt Clinton took the reigns as governor of New York. Keeping to his beliefs and values, Governor Clinton advocated for the creation of the Erie Canal that would fulfill his citizens' desires and bring New York to the top of the economic ladder. Unfortunately, there was one major obstacle in his way: the Mohawk Valley of New York.

Mohawk Valley was, prior to DeWitt's governorship, nothing more than area allocated for growing crops that, due to the lack of a canal system, could not be sold or traded for any profit at all. The area was uneconomical, not productive, and essentially barren. However, there were claims to the region that were withheld by people such as Thomas Jefferson, who refused to provide funding for the canal and did not support its construction at all. DeWitt, however, was resilient. He rallied public support for a state effort to build what his critics called "Clinton's Ditch." When his plan worked however, and he got elected as governor on top of that, construction of the canal began immidiately, running through his two terms in office and opening at last in 1825.

The Canal Itself: Details and Its Effects
When the canal was finished in the 19th century, it became the country's most prosperous artificial waterway. Over 40 feet deep, containing 84 locks, and allowing two-way traffic, the canal was nothing short of a spectacle. And to further add to this, the canal decreased the cost of transporting bulk cargo from 20-30 cents per ton-mile to 2-3 cents; it also increased the speed of transport to 3 miles an hour, thus reducing the trip from Buffalo to New York that used to take a month to only 10 days. However, it did have one small con: the canal was useless when it was frozen over.

The Erie Canal also did not cost the taxpayers of New York a penny since it was financed by bonds, all of which totaled to $8.4 million. As a result of the success of the canal, all of New York wanted more canals built in a similar manner. Consequently, 8 new canals, summing to $9.4 million, were approved, as well as the Erie Canal's reconstruction. The canal was so successful that new cities began to rise near it, and those who were already there grew even larger than they already were. The canal literally inspired and influenced those around it to adopt to an industrial society.

Finally, aside from its economic benefits and efficiency, the canal was a success since it paid itself off in the long run. Thus, it didn't leave anyone in debt, which was a huge relief at the time.
Click here to watch a video about the Erie Canal
Sources: 4, 9, 10, Erie Canal Video