Invented by Robert Fulton, this distinctly American innovation transformed the American economy forever by allowing the South to effectively trade with the West quicker and more effectively. In addition, it revolutionized America by changing the way that river travel was conducted, as well as opening up opportunities for the implementation of canals.

Robert Fulton's The Clermont and the Rise of the Steamboat 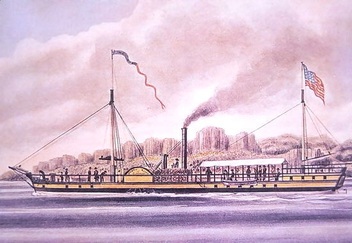 "Fulton's Folly":
In the early 19th century, while the government shifted its focus to internal improvements and roadwork, many American businessmen and inventors began to place a strong emphasis on improving water transportation. One such entrepreneur, Robert Fulton, made an early attempt to complete this task by sending a steamboat that he constructed -- The Clermont -- up the Hudson River from New York City to Albany. Though many doubted his boat's ability and nicknamed it "Fulton's Folly" to add to the mockery, The Clermont was no laughing matter. Travelling the entire 150 miles at a rate of 5 miles an hour, the steamboat proved that it was not only an efficient vessel, but a valuable investment.

The Steamboat Boom:
With Fulton's immense success, many others saw the steamboat as the transportation device of the future. In fact, so many people were interested in the vehicle that by 1815, steamboats were chugging along the Mississippi on a regular basis. By 1830, there were 200 such steamers on the Mississippi, and 10 years later, the quantity increased to over 500. Eventually, over time, production of steamboats was in such demand that they began to grow increasingly luxuriant so to appeal to potential buyers. The General Pike, for example, was a steamboat that was launched in only 1819 and yet had marble columns, ornate mirrors, and plush curtains -- all signs of immense wealth and affluence. These gradual improvements in the comfort that steamboats provided turned them into one of the US's most important water vehicles, especially during the antebellum period and even after the success of the railroad industry.

The Steamboat's Effect on National Trade

Life Before the Steamboat:
Before the introduction of the steamboat, the route down the Mississippi to New Orleans was the most important link between the Southern states and the West. This posed several problems that severely hurt trade. See the slideshow below for an overview of trade before the steamboat.
Life After the Steamboat:
After the introduction of the steamboat, national trade became significantly easier to conduct and the flow of traffic in the United States transformed completely. There were two major subcategories of steamboats that developed after 1807. Foremost, there were Eastern steamboats that were made to carry passengers quickly on deep rivers like the Hudson; they had low-pressure engines and traveled fast. Meanwhile, the other type of steamboat, the Western steamboat, was made to carry more freight. Western steamboats would ply shallow, rocky waters and were thus designed differently from traditional, Eastern steamboats. Instead of low-pressure engines, the Western steamboats had high-pressure ones and were made of lightweight construction material in place of more durable metals. Although the design gave the steamboat a short life-span, it did provide one essential benefit: the ability to conduct two-way river traffic.

When it came to navigating up and downstream, Western steamboats had their chance to shine. Although the steamboats did not replace the flatboats already in use, they were implemented so that the person who steered the flatboat could get home much quicker than in the past. The new steamboats also had the ability to reorder the flow of commerce, which was another essential aspect of their effectiveness in the Transportation Revolution. By making travel via river easier, steamboats were able to strengthen links between the West and the South, thus increasing the commerce and trade between the two. Additionally, it allowed for the port of New Orleans to be more reliable than ever and paved the path for its growth to one of the Unites States's most advantageous trade hubs. No longer did the Mississippi hold a problem and no longer was such trade illogical; due to the steamboat, the Southern economy could suddenly boom due to increased and unlimited trade with the other regions of the United States. Further, thanks to the steamboat, both the Northern and Western states' economies would improve due to the creation of trade-based canals.
Sources: 1, 2, 4