Turnpikes in the Nineteenth Century: A Brief Synopsis 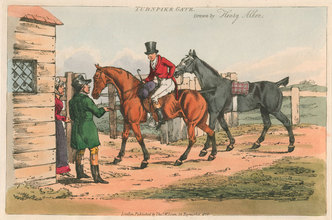 What Turnpikes Were:
Until the end of the 18th century, roads were built and maintained poorly by the towns and counties they were located in. However, this system proved to be very uneconomical and  posed many problems to the parties that were liable for maintaining the roads. As a result, a new type of road, called the turnpike, emerged. These roads were established based on a "pay-as-you-go" means of financing. They were called turnpikes because, interestingly enough, people using them would not be allowed to pass the tollgates without paying the fine; once the transaction was complete, the barrier of sharp spikes ("pikes") blocking the driver would "turn" aside. Thus, the tollgate would "turn" the "pikes"; hence, the routes were referred to as "turnpikes"

How Turnpikes Were Created:
The process of creating and maintaining turnpikes was relatively simple. Public officials and legislators would sanction road provision from private associations, who would be given carefully constructed charters to adhere to. These charters identified the company's total stock. The domain of the road was identified, access to preexisting trails and roadbeds was provided, and monopoly assurance was sometimes granted. Through these means of persuasion, companies were often enticed to engage in the creation of such turnpikes, and after committing to a project, they were given details for construction as well as toll rates and collection.

Turnpike Regulations
After creation, turnpikes were individually regulated. Inspection and enforcement were assigned to state-appointed commissioners, and adherence to financial regulations was checked. Unfortunately, though most states fit the fiscal policies assigned by the state, leniency in terms of physical maintenance led to many roads being decrepit and in poor shape.

The Turnpike-Building Boom: An Early Improvement in American Infrastructure 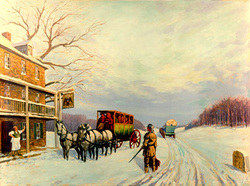 The first turnpike in the United States was the Philadelphia-Lancaster one, which was located in Pennsylvania. It was chartered in 1792 and opened up in 1794 for use by the public, providing significant trading advantages to regional businesses. The turnpike itself ran 62 miles from Lancaster, PA to Philadelphia, and was credited as being the country's first engineered road.

The Dawn of a Road-Building Legacy:
Though the Philadelphia-Lancaster turnpike was simple in terms of what it did and the purpose it served ( connecting two distinct economic regions in Pennsylvania), its effects were far more long-lasting. The turnpike was so popular with local citizens that regional rivalries became to emerge, and consequently, a favorable view toward turnpike petitions and charters grew in the Northeast. The turnpike sparked a movement towards a greater and larger system of roads in the United States. In fact, by 1800, 69 different turnpike companies had been chartered in the various states involved.

The Establishment of Turnpikes Across the United States 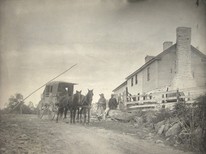 Equipped with a desire to emulate Pennsylvania's success and funded by the federal government in many ways (especially through the American System, founded by Henry Clay, that supported the growth of industry and federal support of internal improvements), the rest of the nation became immersed in an extensive turnpike-building boom. In some states, support for such infrastructural growth was so prevalent that per-capita turnpike investment reached up to $3.90 by 1830.