This railroad, constructed in 1831, was one of the new railroads that came in response to the emergence of the B&O Railroad. It was one of many that were constructed to further develop the transportation-based infrastructure of the United States. 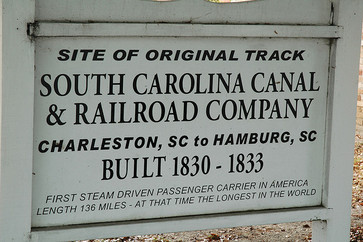 The South Carolina Canal and Railroad Company emerged in 1830 to draw trade from the interior of South Carolina. Originally, the company had built a steam locomotive at the West Point Foundry in New York City, called "The Best Friend of Charleston." This was the first steam locomotive to be sold for sale in the United States.

A year later, the company went on to construct the Mohawk and Hudson railroad, emulating Baltimore's initiation of the B&O Railroad project. The railroad reduced the 40-mile wandering canal trip that took all day to accomplish to a 17-mile trip that took less than an hour. In honor of Governor DeWitt Clinton of New York, who constructed the Erie Canal, the steam engine was named the DeWitt Clinton.
Source: 11