The Transcontinental Railroad was the union of two smaller railroads that conjoined in Promontory, Utah. It was one of the greatest accomplishments of the 19th century. 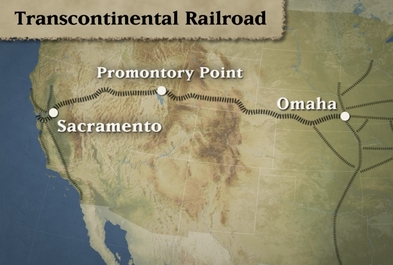 The Transcontinental Railroad was one of the largest railroads constructed in the United States and was one of the greatest feats of the nineteenth century. The goal of the railroad was to link Omaha, Nebraska and San Franciso/Sacramento, California together.

In order to do this, the railroad was divided into two smaller projects. Foremost, there was the Central Pacific Railroad, which started in San Francisco and was built expanding out towards the East. Meanwhile, the Union Pacific Railroad was built from Omaha expanding out towards the West. The two railroads met at Promontory, Utah on May 10, 1869, and to mark the significance of the great joining, a golden spike was driven into the completed railway.

One of he most important aspects of the railroad was that it provided many obs to Irish and Chinese immigrants, who would willingly cross mountains, dig tunnels, and lay track to keep food on their plates and heat in their homes. The railroad was not only an infrastructural experiment, but a business/employment venture as well.
Source: 11