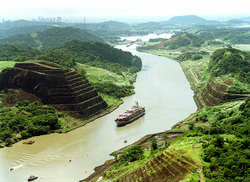 How Canals Worked:
Canals were artificial waterways that were created in large numbers during the first half of the 19th century. To create these canals, private companies would follow the course of natural rivers while replacing some segments  with "canalized" portions, thus creating a large canal in the process.

Initial Disadvantages of Canals:
Canals never followed a direct path unless a "cut" was needed, which was essentially a straight path constructed in the canal system for infrastructural purposes but at a great expense. Thus, if a canal was to be straight, its cost would be prolific. On the other hand, if a canal was to be affordable, it was likely that it would curve viciously and not be as smooth a travelling experience as one would anticipate. Additionally, there were technical limitations that hurt the canals' ability to transport barges and goods. One of the preeminent limits was the lift that locks could provide. Locks, which were basic elevation-shift modules incorporated into canal systems, could initially only provide 8 to 10 feet of leverage; this meant that a 100 foot incline would have required over 10 locks to complete, and given the time taken to get past a single lock, the time wasted waiting would have been profuse. Finally, the last major disadvantage of canals was that they would freeze over in the winter, rendering them absolutely useless.

Initial Advantages of Canals:
Though canals had their cons, particularly economically, their advantages counteracted many of these negatives. For example, canal barges could carry 30 tons whereas horses could transport only 1/8 of a ton. Further, canals provided ways of overcoming natural obstacles and a rough environment for the purpose of increasing trade and commerce with the regions interconnected by the built canals.

Throughout the late 18th/early 19th century, there were a variety of ongoing transportation problems and obstacles that the Northeast faced when attempting to trade and conduct commerce with the interior region of the United States. Some of these issues are depicted in the slideshow below.

In response to the aforementioned factors that led to the need for a canal system, two major ones developed over the course of 20-30 years. The first canal system was an attempt to connect coastal cities as far into the interior as possible. The second canal system  was meant to connect Lake Erie with the Ohio River.

Results of the Two Canal Systems (Improvements and Effects) 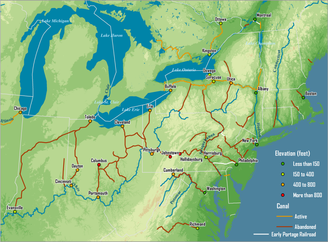 The Rise of New York as Gateway to the West:
Due to Erie Canal, strong bonds were created between New York and the new western territories. Soon the lands of the west would grow into large-scale grain farms, and due to the established canals, the grain produced in those regions could be traded directly with the Northeast for other, industrially produced goods. As a result, the Northeast did not have to rely on subsistence farming any more since western farmers could supply all the food needed in the region.

Additionally, New York became the transportation hub to western lands. Not only was it the center of commerce and trade, but it was also the epicenter of travel into the US interior. For example, Pennsylvanians found the cheapest route to Pittsburgh, which was in their own state, through New York instead of Pennsylvania.

Pennsylvania's Response to New York's Domination:
As a result of New York dominating the canal system of the Northeast, Pennsylvania decided to make its own portage canal system in Pittsburgh that used inclined planes and stationary engines to transport canal boats up and over the Alleghanies. At its peak, Pennsylvania had over 1000 miles of canals in operation.

The Widespread Use of Canals and their General Improvements:
By the 1830s, the country had a complete water route from New York City to New Orleans, and 10 years later, over 3,000 miles of canals had been built. These canals were much more effective than they were in the past as they developed a new lock system that could lift barges 40 feet up instead of only 8. Additionally, as time passed on, the manually controlled rudder and horse-pulled barges were replaced by motors. Basically, over time, canals became increasingly efficient. However, unfortunately, their efficiency was short-lived as the railroad system completely took over the transportation industry by 1860.
Sources: 4, 8, 9, 10